Our frequent and reliable food delivery in Davao City – foodpanda Philippines celebrated their 1st anniversary in the city and their 5th anniversary in the Philippines with Bites X Vibes, a weekend food fair from May 10-12, 2019 from 4PM to 9PM at the SM Lanang Premier North Wing Event Grounds. The said food event was open to the public and not just for its app users. 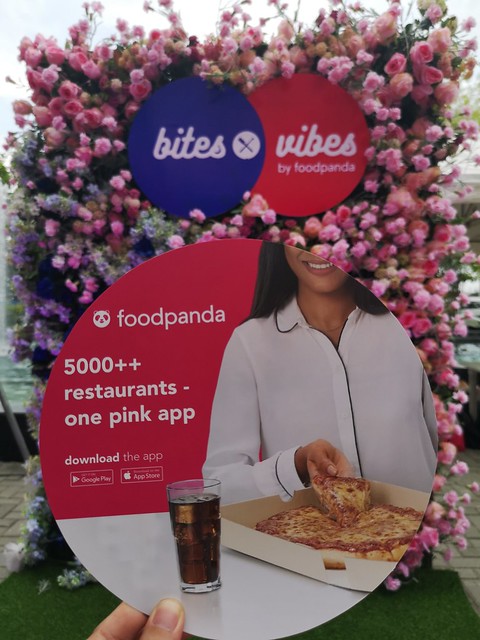 We were happy to be invited to this celebration not just as bloggers but as one of their food delivery app users and customers. 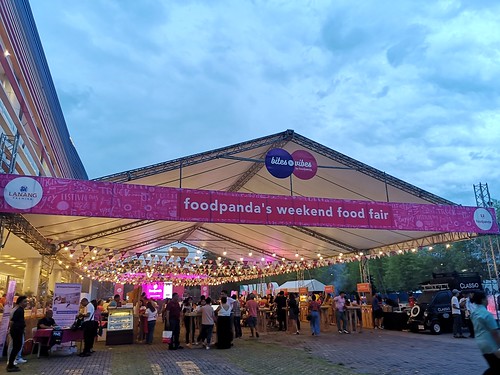 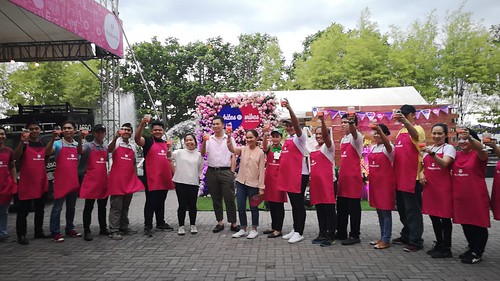 foodpanda’s Rey Rubio (center) with Anne Eliseo and the various reps of the purveyors taking part in their first weekend food fair here in Davao.

I am happy to find a familiar fave dessert treat among the food at their food fair. Can you guess what it is? 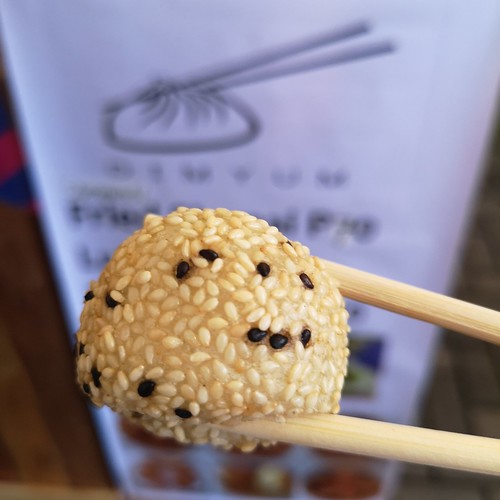 It is the bestselling matcha buchi of DimYum Restaurant which happens to be our fave resto to order according to foodpanda. They send this email every month or so telling you somewhat like a summary report of your orders per month. I guess because it is always the fastest to deliver when our hungry tummies decide to order during times when we cannot cook at home. This matcha buchi happen to also get the yummy approval of fellow bloggers and vloggers there as we tried the food around the foodpanda food fair, their first in Davao and hopefully this is just the first of many other food fairs in the city.

Anyway, if you happen to have DimYum in your list of restos in your foodpanda app, try to order this one and let us know what you think. My boys and I also like their oreo snowball and chocolate xiao long bao for dessert treats at home thru foodpanda delivery. Plus their dimsums are good and their spicy dumplings are one of our fave. And their char kway teo for noodles. Okay, should  I go on? Hahaha! 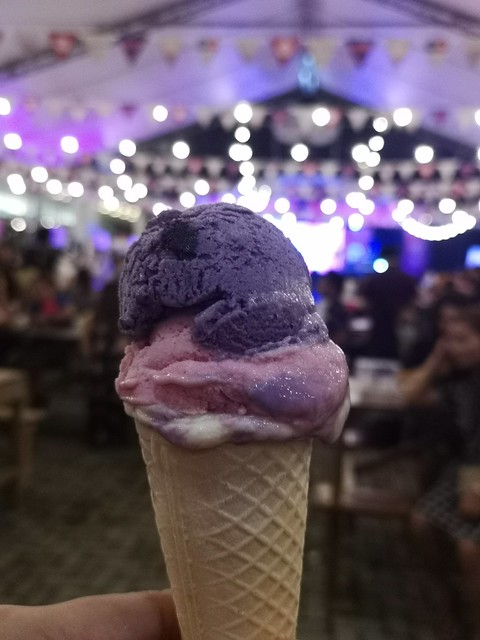 The ice cream from Paniza at the food fair was a treat too for the kid inside me and those kids at heart in there. This was being sold for P15 only. If you are a Paniza ice cream lover please let us know by commenting below this post! *wink*

Since it was a Mother’s Day weekend during the food fair, this cake from one of the purveyors, Cafe Annabelle’s would have been a good treat to give for moms who visited the weekend food fair with their families. 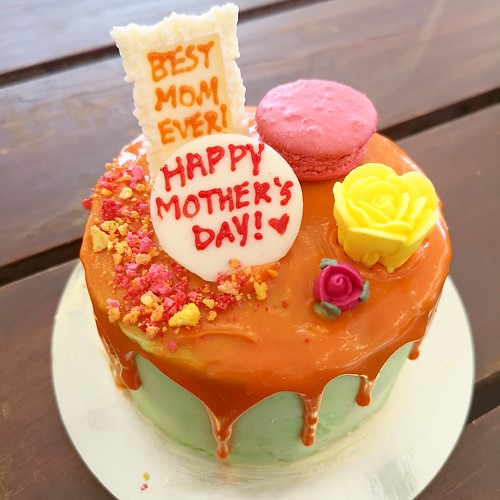 This pizza from Classio Mobile Oven Pizza was also something I enjoyed eating while we were at the food fair with friends. 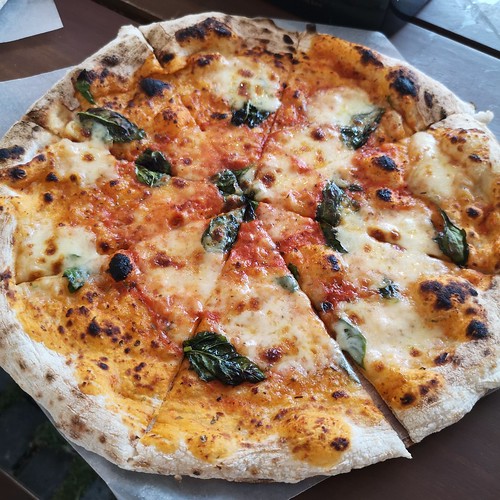 I know everyone has their own fave food at this foodpanda food fair. What was your fave? Share it in the comment and we will try that through foodpanda delivery.

The following foodpanda partners at the weekend food fair:

Read on to know more from our friends from foodpanda Philippines:

foodpanda, the on-demand platform, held their first bites&vibes, a weekend food fair, in Davao City, to celebrate their fifth year with organizing a food festival and an anniversary concert for their customers.

Happened during Mother’s Day Weekend, May 10 – 12 at SM Lanang Premier’s Northwing Event Grounds, fountain court, bites&vibes showcased Davao’s favorite local eats from foodpanda and gather all Davaoeños for a weekend! This food fair is not only about food, but it comes with music and entertainment. On top of this cultural and foodie celebration, foodpanda also further their efforts to educate customers on sustainability with some unique plastic-free kits for the festival goers.

With more than a hundred restaurant brands in the region alone, this was a call to all the foodies in Davao to enjoy their favorite restaurants all in one place for one weekend! Pizza from Classio Mobile Wood Fired Oven, local Filipino offerings from Cucina Ilocana, pastries, from Cafe Annabelle’s, beverages from Limonaad and Juice Co., and a whole lot more of Davao’s best local delicacies will be there for customers to mix and match their favourite cuisines, just name your craving! 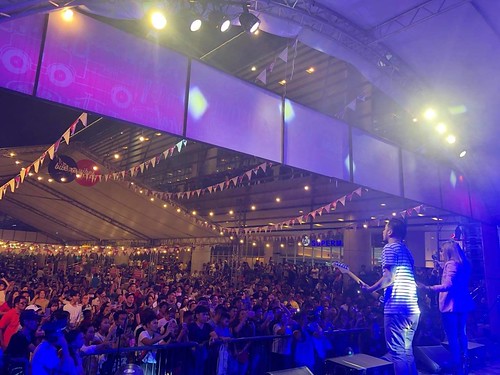 SOAK IN THE VIBES.

Before all the feasting (and drinking) kicked off, guests were welcomed with tunes and beats from different local singers and bands such as the Boomers, Next Option and Gap69. With acts throughout the weekend, the music contributed to the overall laidback, fun weekend vibes. And for the best vibes of weekend, performance from folk-music performer Clara Benin on Saturday night and Moonstar88 during Mother’s Day dinner was definitely a showstopper!

Apart from the food-filled bites and fun-filled vibes, foodpanda is also proud to say that the event will be earth-friendly, aligning with their #GoGreen mission. The event championed sustainability and minimal waste initiatives by having the partners use biodegradable packaging, eliminating the sale of single-use plastic water bottles and providing water coolers for visitors.

foodpanda is dedicated to bringing food lovers around the world their favorite meals from curated local restaurants. Since its creation, the on-demand food delivery service has grown to more than 27,000 partner restaurants in more than 190 cities across 12 Asian and Central Europe countries globally. foodpanda is active in Hong Kong, Singapore, Thailand, Malaysia, Pakistan, Taiwan, Philippines, Bangladesh, Brunei, India, Romania and Bulgaria. It belongs to Delivery Hero, worldwide leader of the food delivery industry. For more information visit www.foodpanda.ph.

Through the foodpanda website or via the new iOS and Android apps, customers can enter their address and view a curated list of restaurants serving their neighborhood. Once they have found their meal of choice, they can place an order in the comfort of their home or office, paying online through foodpanda’s secure platform. The order is then carefully prepared by the restaurant, picked up by the foodpanda rider and delivered straight to their doorstep.